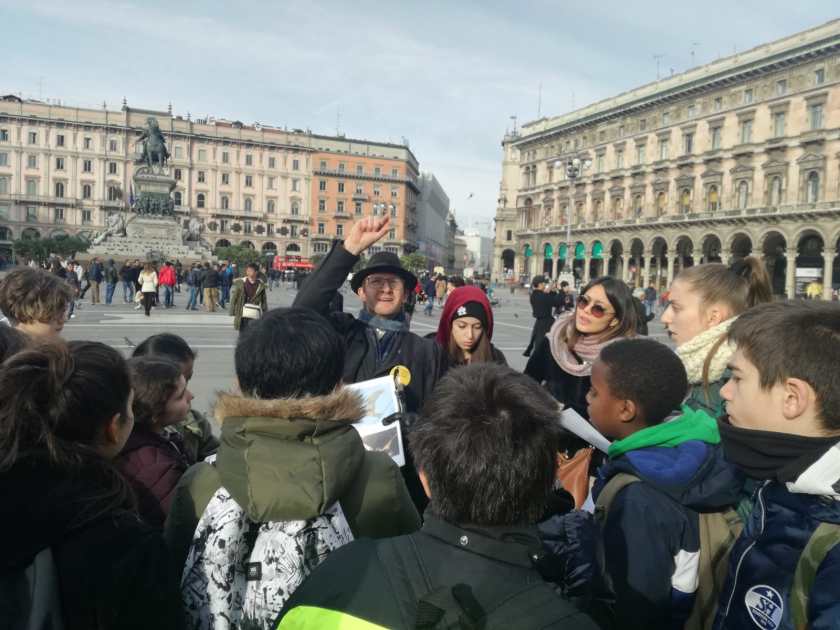 On 6 February 2020, class 2D went on a special school trip: a history walk regarding Leonardo da Vinci’s life in Milan.

The starting point of the tour was Piazza del Duomo. There the guide introduced the guys to the historical background of the Renaissance, i.e. the period in which Leonardo lived. The artist was born in Anchiano, near Vinci (a small town in Tuscany). When he was very young, he joined the studio of the famous sculptor Andrea del Verrocchio in Florence. In the following years, Leonardo sent a letter to Ludovico il Moro because he admired the city of Milan and wanted to work there. Today we would compare such letter to a “CV” (Curriculum Vitae). Indeed, the text contained a detailed list of Leonardo’s skills. Since in the past he had deeply devoted himself to painting and sculpture, now he wanted to discover a new field: engineering.

After this brief introduction, the students went to Piazza della Scala, where there is a big statue of Leonardo. Next to it there are other statues. One of them is that of Andrea Salaino, who was a pupil of the artist.

The tour continued at “Piccolo Teatro Grassi”, which is a theatre in the heart of Milan. In the past, this building was the house of Cecilia Gallerani, i.e. the woman painted by Leonardo in the work “Lady with an Ermine”. Since Cecilia wanted to restore her house, she hired the best artists of the time including Leonardo da Vinci and Bramante. Moreover, on one of courtyard walls of the theatre there is a sundial, a clock that tells the time of the day according to the position of the Sun in the sky. Some scholars think that Leonardo built it, but there is no clear evidence that this really happened.

The walk ended in one of the most famous places of Milan: Castello Sforzesco (Sforza Castle). In 1490 this castle hosted the wedding party of Ludovico Sforza’s nephew. Such event is known as “The Feast of Paradise” because its inspiring theme was the firmament. On this occasion, Leonardo designed the decorations of the rooms. He also designed the gowns of the children, who dressed up as angels and planets.

This interesting history walk allowed the pupils to improve their English language skills, and their knowledge of Leonardo’s incredible works as well.